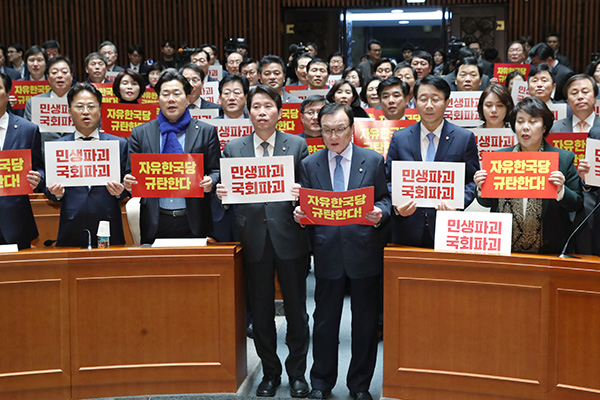 The ruling Democratic Party(DP) has given the main opposition Liberty Korea Party(LKP) until Tuesday evening to drop its filibuster threat over some 200 bills.

With the addition, all fast-tracked bills, including one on election reform, are currently on the calendar.

In issuing the ultimatum, Lee also called on the LKP to participate in passing pending bills related to people’s livelihoods in a plenary session, including one designed to improve traffic safety in school zones.

The LKP had earlier moved to filibuster 199 pieces of legislation to prevent a vote on the fast-tracked bills.

Lee’s remarks suggest that if the LKP does not abandon its filibuster threat by Tuesday night, the DP will move to pass the pending bills by sidestepping the main opposition.

The LKP, for its part, emphasized that its filibuster move is an inevitable outcome of efforts to block the fast-tracked bills. The party said the reason livelihood bills have failed to be handled is because the DP has not guaranteed the LKP's right to filibuster.

With the ruling and main opposition parties at loggerheads, the minor conservative Bareunmirae Party proposed a compromise.

The party’s floor leader, Oh Shin-hwan, suggested that the parties accept revisions to the electoral reform bill on mixed-member proportional representation and legislation on prosecutorial reform that would establish an agency to investigate corruption by high-ranking public officials.