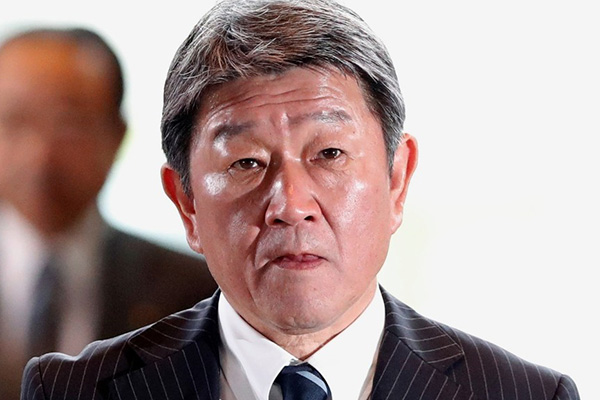 Japan is showing no signs of making concessions regarding South Korean court rulings on Japan’s wartime forced labor despite the growing prospect the first South Korea-Japan summit in more than a year will be held later this month.

Japanese Foreign Minister Toshimitsu Motegi said in a regular media conference Tuesday that Tokyo will stick to its long-standing stance on the issue.

He made the remark while revealing he and his South Korean counterpart Kang Kyung-wha agreed last month to coordinate to hold a bilateral summit on the sidelines of a trilateral summit with China to be held later in December.

Motegi said South Korea and Japan have major tasks at hand, including discussions on regional security environments and the issue of Koreans forced to work for Japanese firms during World War II.

He said Japan will continue to strongly demand Seoul swiftly correct its violation of international laws in reference to the 1965 normalization treaty which Tokyo claims settled all colonial-era issues with South Korea.

He said the two countries also agreed to continue communication on major pending issues through foreign ministers’ meetings or other diplomatic routes.

Earlier in the day, Japan’s Kyodo News Agency quoted Japanese Prime Minister Shinzo Abe as saying he is coordinating bilateral summits with South Korea and China on the sidelines of the upcoming trilateral summit in Chengdu.

If the leaders of South Korea and Japan sit down for talks, it will be their first bilateral summit in 15 months.
Share
Print
List