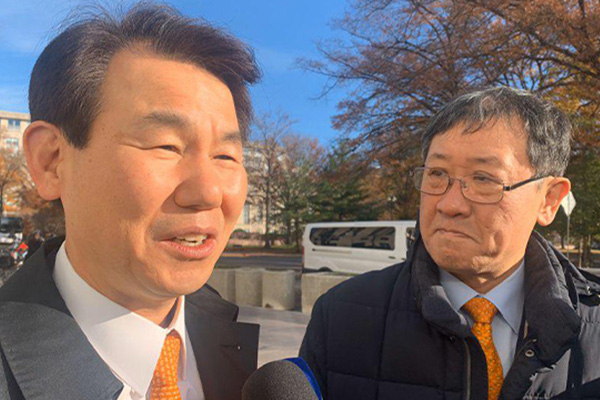 South Korea and the United States on Tuesday began a fourth round of negotiations in Washington on sharing the costs for the upkeep of U.S. troops on the Korean Peninsula.

Just hours before the talks, U.S. President Donald Trump said in a news conference that it was debatable whether keeping American troops stationed in South Korea is in the U.S.' national security interest.

The remarks indicate that he may consider reducing troops on the peninsula if negotiations do not go in a way Trump wants.

Jeong Eun-bo, Seoul's chief negotiator in the cost sharing talks, told reporters after negotiations in the morning at the U.S. State Department that Trump's comment was not mentioned at all and that talks are proceeding well.

The negotiations will run for two days through Wednesday.

The U.S. has reportedly demanded that South Korea pay nearly five billion dollars for the upkeep of American troops in the country next year, a fivefold increase over what Seoul currently contributes.
Share
Print
List