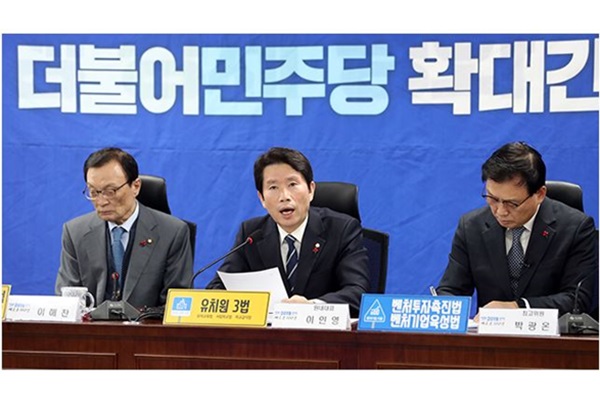 Partisan wrangling over next year's budget and fast-tracked reform bills continues with only four days left in the National Assembly's regular session.

Ruling Democratic Party(DP) floor leader Lee In-young said on Friday his party will do all it can to strike a deal on the pending bills within the so-called four-plus-one consultative framework involving minor opposition parties and a group of lawmakers who say they will forge their own party.

The DP has formally requested a plenary session on Monday to put the budget and reform bills to a vote and will also move to open an extraordinary session starting on Wednesday.

The main opposition Liberty Korea Party(LKP), which had planned to launch a filibuster in an attempt to block the reform bills, is expected to return to negotiations after a new floor leader is elected on Monday.

A faction which opposes the leadership of the minor opposition Bareunmirae Party strongly objected to budget negotiations taking place within the "four-plus-one" framework, accusing those involved of illegally reviewing the budget behind closed doors.

Rival parties also clashed over the prosecution's probe into alleged election meddling and inspection suspension by the presidential office, with the DP accusing the prosecution of targeting the top office in protest of the administration's prosecutorial reforms.

The LKP, which has filed complaints with the prosecution against eleven people, including former Justice Minister Cho Kuk, called for the truth to be revealed behind both cases.
Share
Print
List