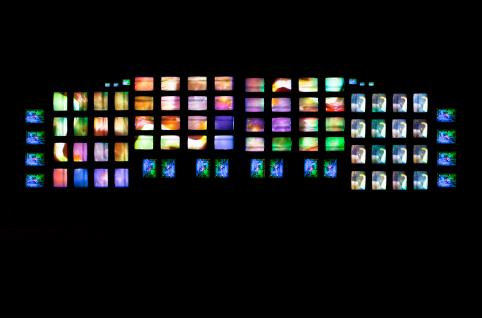 Major installation works by the video art pioneer Paik Nam-june are on display at the Korean Cultural Center in New York.

The special exhibition, titled "Nam June Paik: The Maestro of Time," opened Thursday and runs through the end of January in celebration of the center's 40th anniversary.

It features two of Paik's masterpieces: "M200/Video Wall" and "Video Chandelier No. 4."

"M200" is a large-scale video art created in 1991 to commemorate the 200th anniversary of Mozart's death. It consists of 86 TV monitors featuring videos of Mozart and contemporary artists and musicians Paik had exchanges with during his life. The soundtrack includes classical music, pop and instrumental sounds.

The well-known piece is being shown to the public for the first time since it was showcased at the PyeongChang Winter Olympics in February 2018.

The center said his many titles such as father of video art and visionary performance artist are made evident through the exhibit.
Share
Print
List