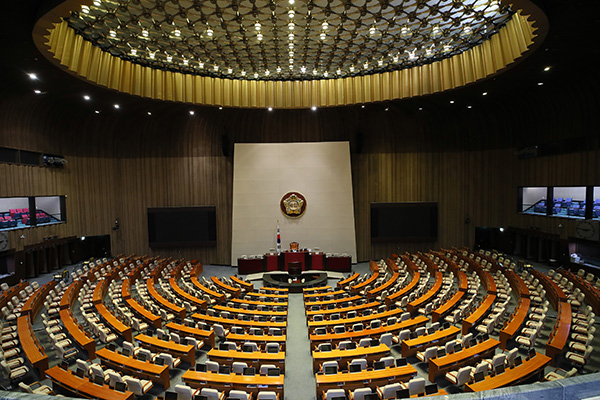 Lawmakers again failed to resolve their deadlock over a planned filibuster that has already paralyzed parliament for one full week.

National Assembly Speaker Moon Hee-sang on Friday arranged a meeting between the floor leaders of the ruling and opposition parties to reach a compromise.

However, main opposition Liberty Korea Party floor leader Na Kyung-won did not join the talks, collapsing the prospect of passing non-contentious bills, including the government's budget plan for next year.

Earlier in the day, the floor leaders of the rival parties were working on a mediation plan that would see the LKP scrap its filibuster and have the ruling Democratic Party delay the passage of contentious fast-tracked legislation.

The LKP scheduled a filibuster last Friday, holding up voting on 199 pending bills in a bid to block revisions to the nation's election law and the creation of a new anti-corruption investigator. The DP and smaller opposition parties chose not to open floor proceedings to prevent a series of filibuster speeches.

After the latest talks collapsed, the speaker's office said Moon will open the floor for a plenary session on Monday and Tuesday of next week to vote on the 2020 budget and all other pending legislation.
Share
Print
List