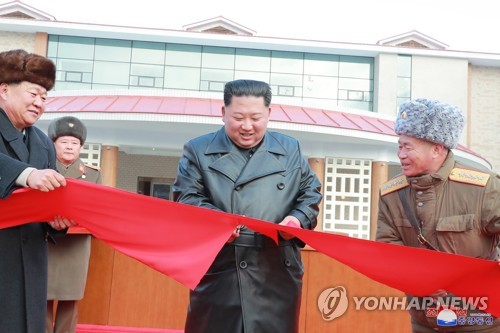 North Korean leader Kim Jong-un attended a ceremony on Saturday to celebrate the completion of a spa resort in the country's central region.

According to the Korean Central News Agency on Sunday, Kim attended the ceremony for the completion of the Yangdok spa resort in the North's South Pyongan Province.

Kim reportedly expressed great pleasures about the new spa, saying that the completion of the spa resort was "a great victory of the line of self-reliance" which once again declared to the world that steady development and prosperity can be achieved even in the worst adversity.

The one-point-66 million square meter resort was completed after a year of construction, featuring therapeutic hot springs and spas, ski slopes and a hotel.

Kim has visited the spa resort four times this year in an apparent effort to build a competitive tourism industry as the country is stressing economic development with a spirit of self-reliance.
Share
Print
List