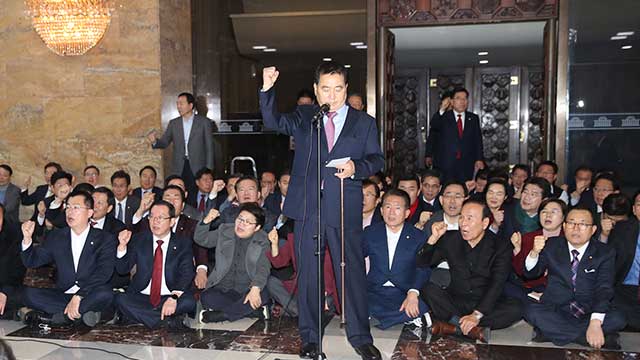 The main opposition Liberty Korea Party(LKP), which began a sit-in in front of the plenary chamber immediately after the bill was approved, accused the ruling Democratic Party(DP) of illegally passing the bill in collusion with the minor bloc.

His party considers the DP's negotiation with the minor bloc under the so-called "four-plus-one" framework illegitimate. With the exception of the Bareunmirae Party, the minor parties have no formal negotiating team with less than 20 parliamentary seats.

The LKP was also heavily criticized for its "disgraceful behavior." DP floor leader Lee In-young said pushing ahead with voting was inevitable in order to break the LKP's attempt to delay the process.

The DP, meanwhile, called off a plenary meeting on the first day of an extra session on Wednesday to adjust its pace of handling a set of controversial reform bills facing strong objection from the LKP.

The party is expected to keep the door open for dialogue with the LKP while it attempts to finalize negotiations on the controversial electoral and prosecutorial reform bills within the four-plus-one framework. Their aim is to put the bills up for a vote later this week.

The LKP, for its part, is exploring ways to prevent the passage of the reform bills in their current state, including a filibuster and negotiations.
Share
Print
List