Esper: N. Korea Trying to Develop ICBM is Direct Threat to US 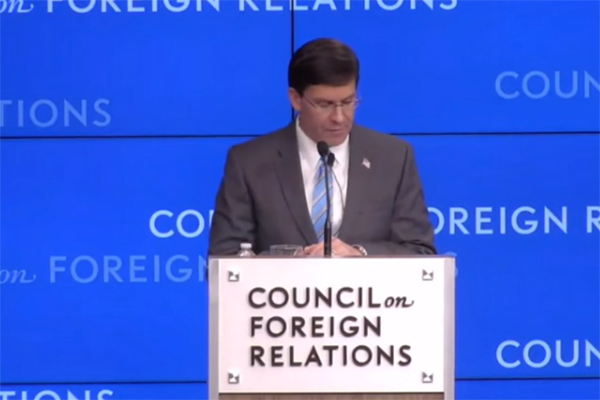 U.S. Defense Secretary Mark Esper has warned that North Korea already has nuclear weapons and is now trying to develop an intercontinental ballistic missile, which he called it a direct threat to U.S. homeland.

In a lecture in New York on Friday hosted by the Council on Foreign Relations, Esper said the U.S. is trying to get the North back to the negotiating table and hopefully "not back on the other path."

He said Washington is trying hard to resume negotiations because the threat of North Korea's nuclear and missile programs can only be resolved through a diplomatic agreement.

Esper said war on the Korean Peninsula would be "horrible" and nobody wants to see that.

Regarding response measures, he said several U.S. administrations have made the attempt but the shared theme was to prevent North Korea from possessing nuclear weapons and long-range ballistic missiles.

He said the regime was now trying to develop an ICBM and will become a direct threat to the U.S. homeland.

On the issue of sharing defense costs, the secretary said it's not too much to ask allies to increase their contribution.

He said there can't be any free riders or any discount plans and that we are all in it together.
Share
Print
List