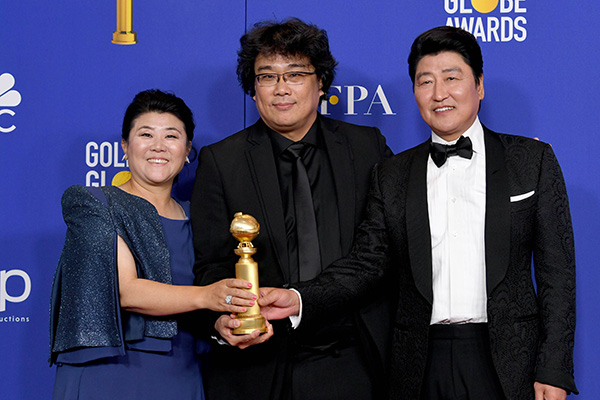 [Sound bite: Director Bong Joon-ho (Korean as translated by onsite translator)]
“Once you overcome the one-inch-tall barrier of subtitles, you will be introduced to so many more amazing films.”

Bong told reporters he didn't expect the film to be so well received by American movie buffs.

[Sound bite: Director Bong Joon-ho (English)]
"Yeah, I very happy and excited. But to be honest, I never expected something like this. I'm in the red carpet of the Golden Globe. This kind of situation never expected. So more happier."
[Sound bite: Director Bong Joon-ho (Korean as translated by onsite translator)]
"But the success is all based on the explosive reaction we've gotten from the U.S. audience. And I think that's what makes me really happy."

Bong described his film as being about class and capitalism.

[Sound bite: Director Bong Joon-ho (Korean as translated by onsite translator)]
"This story is a very contemporary one about the gap between rich and poor. And essentially, it's about capitalism. And I think it's undeniable that the heart of capitalism is the U.S. And so, I think it's been very gratifying to see the strong reaction here."

"Parasite" was also nominated for best director and best screenplay, but ultimately lost to Sam Mendes' "1917" and Quentin Tarantino's "Once Upon a Time in Hollywood," respectively.

The Golden Globe is the latest achievement for "Parasite," which won the Palme d'Or prize at the 2019 Cannes Film Festival and continues to rake in accolades and nominations worldwide.

It has been shortlisted for best international feature film and best original song for this year's Academy Awards.