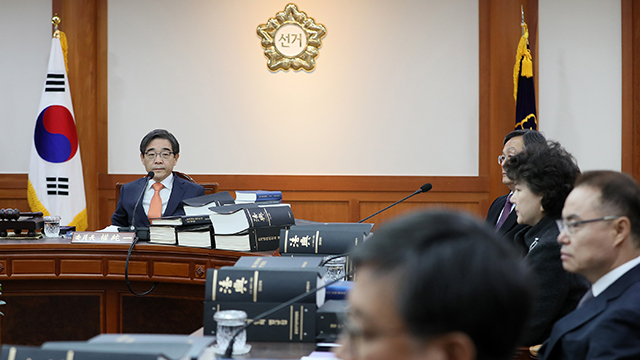 Anchor: South Korea's National Election Commission has finalized revised polling regulations for the April 15 general elections and disapproved of the main opposition's makeshift election strategy of creating a satellite party, dubbed the "Proportional Liberty Korea Party." The election watchdog stressed that new parties must be named in a way that clearly distinguishes it from existing parties.
Kim Bum-soo has more.

Report: Creating a satellite party was the main opposition's defense strategy against minor parties, which are expected to win more seats under the revised proportional representation rules.

In a plenary session on Monday, the National Election Commission(NEC) rejected the idea of creating the "Proportional Liberty Korea Party" ahead of the April parliamentary elections.

While disapproving the creation of the "Proportional LKP," the election watchdog issued a statement citing Article 41 of the Political Party Law which bans the use of similar sounding names in the titles of political entities.

But for the Liberty Korea Party, having a satellite party with a similar sounding name was key so that voters will be able to easily associate the two parties.

The LKP has argued the ruling Democratic Party agreed to the revised election laws proposed by the minor Justice Party only to gain smaller parties' support in the passage of a series of bills needed for the creation of a new anti-corruption investigative bureau.
Kim Bum-soo, KBS World Radio News.
Share
Print
List