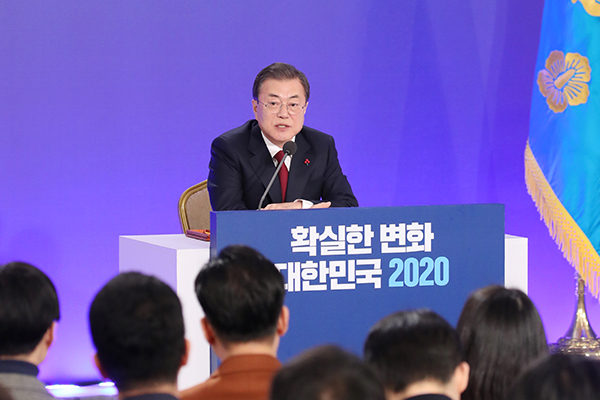 Anchor: President Moon Jae-in held a live question-and-answer session marking the new year at the top office. During the nearly two-hour-long televised event, the president discussed his plans for North Korea, prosecutorial reform and other key concerns facing the administration in 2020.
In the first report on the session, our Kim Bum-soo focuses on President Moon’s comments on international politics related to North Korea.

[Sound bite: Presidential Q&A news conference (Jan. 14)]
"We can neither be optimistic nor pessimistic about the dialogues between the South and North Korea and between the North and the U.S... "

President Moon Jae-in says it is too early to be disappointed about the prospect of denuclearizing North Korea.

[Sound bite: President Moon Jae-in (Korean)]
"There were concerns about North Korean provocation, but President Trump remembered Chairman Kim's birthday and sent birthday congratulations to him. I think it was a great idea, underlining intentions for talks. North Korea received the message and responded immediately, emphasizing friendly relations between the two leaders. North Korea added conditions that its demands must be met for dialogue, but it's clear that the door is still open for talks."

The South Korean president held a question-and-answer session with reporters on Tuesday, addressing a wide range of issues, including stalled nuclear talks with North Korea.

[Sound bite: President Moon Jae-in (Korean)]
(Reporter: Is South Korea's support for sanctions a blank check for Washington? Is it unconditional?)
"North Korea sanctions are not goals in themselves. The goal is to derive North Korea's denuclearization through sanctions. Likewise, if the North takes substantial measures, the U.S. and the international community must take corresponding measures, and that could include weakening sanctions."

But for Moon, the dilemma is how to assure North Korea that it won't end up like Libya's Muammar Gaddafi or Iran's Qassem Soleimani.

[Sound bite: President Moon Jae-in (Korean)]
(Reporter: How can you now convince Kim Jong-un that he should still give up his nuclear weapons and how can you convince him that any deal he may do with this administration will not be simply overturned by the next administration?)
"What I discussed in my New Year’s address is that South Korea should not just rely on North Korea-U.S. talks. As that dialogue is in a stalemate, we should find various realistic methods to improve inter-Korean relations as much as we can. That's not only great in itself but can also bring positive effects to the North Korea-U.S. talks to create a virtuous cycle.... "

With Pyongyang sidelining Seoul in the stalled nuclear talks with the U.S. and the U.S. remaining adamant on the sanctions front, Moon didn't have an immediate answer.