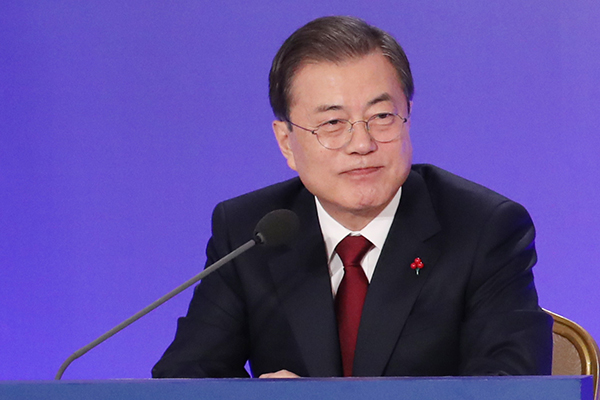 Anchor: President Moon Jae-in spent significant time of his New Year’s press conference on Tuesday laying out plans for his signature campaign to reform the nation's prosecution. Amid the prosecution's ongoing investigations into scandals involving figures close to him, the president said that reducing the authority of powerful institutions is the essence of public demands for reform.
Our Kim Bum-soo has more.

South Korean prosecutors have been widely accused of siding with the powerful and using their authority to open politically motivated investigations.

Some observers even accuse them of seeking to block government reform efforts by launching all-out probes into electoral and corruption scandals involving figures close to Moon.

[Sound bite: President Moon Jae-in (Korean)]
"Anyway, I think Prosecutor-General Yoon Seok-youl has already earned the public’s trust as somebody who conducts impartial investigations, investigations that don’t bend to authority. In regards to this, I believe that Yoon would receive much more trust from the public if he takes the lead in correcting the prosecutors’ organizational culture and investigative practices, which have come under public criticism, recognizing a bit more clearly that prosecutors, too, are a body that should come under democratic control."

Moon denied accusations that his reform efforts are aimed at suppressing the prosecution and getting it to work to the administration's advantage, saying the prosecution is an organization that should be subject to democratic checks and balances.

On the domestic political front, the president stressed bipartisan unity and said he is open to having Cabinet members from the opposition bloc who are willing to work with him after the general election.

He expressed hope that the April 15th election will serve as momentum to bring about the politics of unity and integration.

Moon also expressed his view of the government’s previously botched attempt to revise the constitution in order to replace the current single five-year presidential term with a maximum of two successive four-year terms.

He said the failure to pass a related motion in the face of opposition in 2018 was regrettable and noted that it is up to the parliament to revive the momentum to pursue it.

Moon said if lawmakers push once again a constitutional amendment during the next National Assembly, he will review it based on public opinion and decide his final stance.
Kim Bum-soo, KBS World Radio News.
Share
Print
List