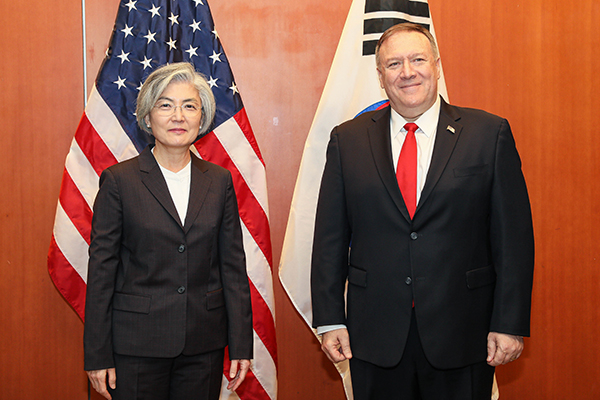 The top diplomats of South Korea and the United States on Tuesday agreed to continue close cooperation to bring North Korea back to the negotiating table.

After the 50-minute meeting, the Foreign Ministry said in a statement that the two sides shared their assessments of recent developments on the Korean Peninsula.

It said the two officials exchanged views on managing the situation to maintain momentum for the denuclearization dialogue process through close South Korea-U.S. coordination.

The ministry said the two sides also held in-depth discussions on further strengthening the bilateral alliance while recognizing that the countries have expanded their cooperation in a mutually beneficial manner.

In the meeting, the top U.S. diplomat reportedly said Washington hopes South Korea will participate in the U.S.-led campaign to safeguard the Strait of Hormuz near Iran.

Kang reportedly said in response that Seoul will continue reviewing the matter as it is important to protect the property and lives of South Koreans.

Seoul's Foreign Ministry said that the three sides reaffirmed the importance of trilateral cooperation for achieving the joint goal of the complete resolution of the North Korea nuclear issue and regional peace and stability.