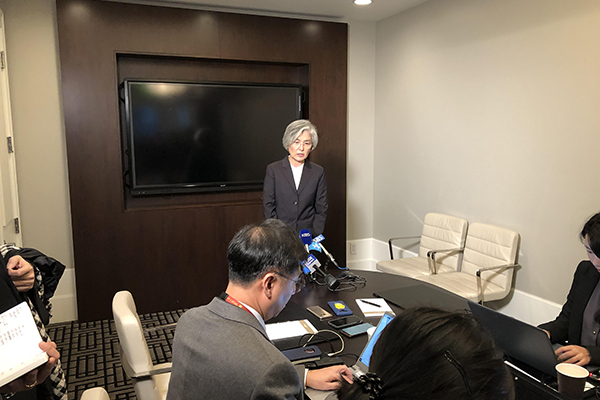 South Korea's top diplomat says depending on the circumstances, inter-Korean cooperation could resume before talks between the United States and North Korea do.

Foreign Minister Kang Kyung-wha made the remarks on Tuesday at a meeting with reporters following talks with her U.S. and Japanese counterparts in San Francisco.

Asked if Seoul shares Washington's position that inter-Korean cooperation should proceed alongside U.S.-North Korea denuclearization talks, Kang said Seoul believes the two relationships should supplement each other in a virtuous cycle.

The minister added it is important for the two Koreas to do what they can to maintain momentum for engagement, especially when diplomatic efforts between Washington and Pyongyang are at a standstill.

Kang said she and U.S. Secretary of State Mike Pompeo exchanged views on Seoul's desire to resume inter-Korean projects that are not bound by international sanctions, stressing there is sufficient understanding from the U.S. side.

The position was reaffirmed by Unification Minister Kim Yeon-chul, who said at a meeting with religious and civic leaders in Seoul on Tuesday that the government plans to seek improvement in inter-Korean ties by supporting civilian-led exchanges and cooperation.
Share
Print
List