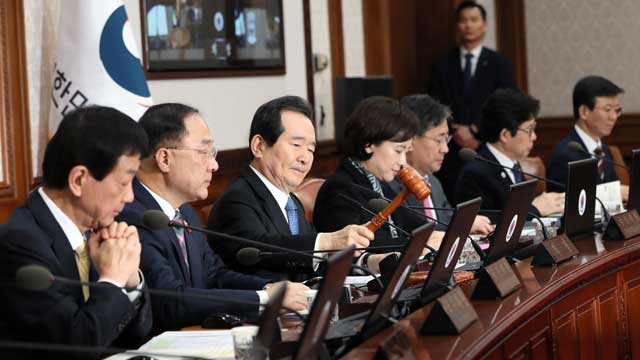 New Prime Minister Chung Sye-kyun asked government ministers to make every possible effort to revitalize the economy and unite the nation, calling on them to spearhead substantial change.

Chung made the calls while presiding over a Cabinet meeting Wednesday, his first since he was officially appointed prime minister the previous day.

Chung asked the ministers to go all out in revitalizing the economy and bringing stability to people’s livelihoods.

In particular, he stressed promoting a desirable business climate by actively getting rid of regulations and boosting the momentum for innovative growth.

The prime minister also called on each ministry to engage in dialogue and communicate with the people.

Chung vowed to visit actual sites where government policies are implemented and listen to what the people have to say, adding he would seek advice from the National Assembly, labor and business circles, among other diverse areas.

In addition, Prime Minister Chung called on the ministries to transform the way they do business so as to produce tangible results for the people.

He also called on public officials to change their attitudes to become proactive and creative experts.

On international affairs, Chung noted that tensions are escalating between the U.S. and Iran.

He called on the ministries to set up airtight measures to swiftly handle any contingencies that may stem from the conflict.
Share
Print
List