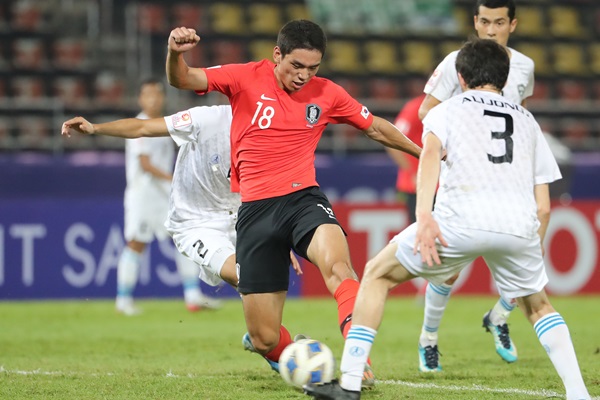 The South Korean men's national football team defeated Uzbekistan two-one on Wednesday to take the top seed in their group at an Olympic qualifying tournament in Thailand.

With a two-goal performance by forward Oh Se-hun on his 21st birthday, South Korea claimed their third straight victory in Group C at the Asian Football Confederation(AFC) U-23 Championship.

South Korea's first goal came only five minutes into the match, as Jeong Seung-won's shot from outside the box went in off Oh's right shoulder.

Uzbekistan tied things up in the 21st minute on Bobir Abdixolikov's floating header before Oh took a pass from Lee Dong-gyeong and pivoted around Islomjon Kobilov before putting South Korea back on top for good with a 71st minute goal.

The AFC tournament serves as the continental qualification for the 2020 Tokyo Olympics, with the top three teams guaranteed spots in the Summer Games.