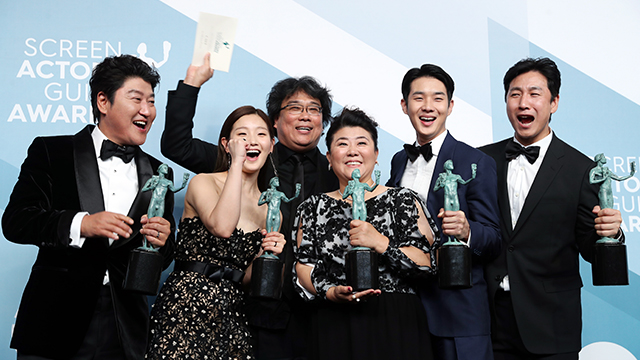 The cast of the South Korean film "Parasite" on Sunday received the highest honor at the annual Screen Actors Guild(SAG) Awards in Los Angeles.

Song Kang-ho, Park So-dam, Choi Woo-shik, Lee Jung-eun and Lee Sun-kyun received a large standing ovation as they stepped on stage to accept the SAG Award for Outstanding Performance by a Cast in a Motion Picture.

Speaking on behalf of the cast, Song said he was honored to receive a big award in front of such great actors he respects, adding that he will forever remember the beautiful moment.

Bong Joon-ho's "Parasite" beat out four other contenders, including Martin Scorsese's gangster epic "The Irishman" and Quentin Tarantino's 1960s-era film "Once Upon a Time... in Hollywood."

It also became just the first foreign-language film to win the ensemble prize.

The latest award holds particular significance as none of the "Parasite" cast members have yet received individual nominations or awards despite the movie's success and Bong's various international prizes.

The SAG Awards are generally considered a significant bellwether for which way Academy Award voters may be leaning ahead of the awards ceremony next month in Los Angeles.