S. Korea to Send Warship to Strait of Hormuz amid US-Iran Tensions 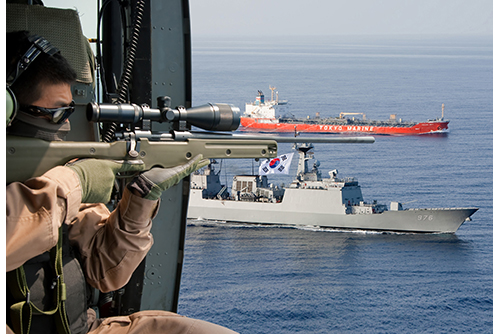 Anchor: South Korea will dispatch its anti-piracy Cheonghae Unit to the strategic Strait of Hormuz. While announcing the decision in response to repeated U.S. calls for help, the South Korean Defense Ministry underlined that the naval unit will operate independently from a U.S.-led military coalition there.
Kim Bum-soo has more.

Report: South Korea will send a warship and commandos to the strategic Strait of Hormuz in response to U.S. calls for help.

However, in apparent consideration of Seoul-Tehran relations, the Cheonghae Unit will operate independently instead of joining the U.S.-led International Maritime Security Construct(IMSC).

While announcing the decision Tuesday, Deputy Minister for National Defense Policy Chung Suk-hwan noted two South Korean officers will be sent to the IMSC headquarters so that the Cheonghae Unit can join the U.S. campaign if deemed necessary.

[Sound bite: Deputy Minister for National Defense Policy Chung Suk-hwan (Korean)]
"There are about 25-thousand South Koreans living in the Middle East and the Strait of Hormuz and its vicinity is a strategically important area accounting for over 70 percent of our crude oil shipments. Our ships pass through it 900 times a year, so it demands a prompt response from the South Korean military in an emergency."

Renowned for its 2011 rescue of Korean sailors taken captive by Somali pirates, the naval unit had previously focused on counter-piracy operations around the Horn of Africa. For the new mission, the four-thousand 400 ton destroyer ROKS Wang Geon with roughly 300 personnel on board will expand its theater of operations from the Gulf of Aden to the Gulf of Oman.

Oil tankers passing through the Strait of Hormuz between Oman and Iran came under attack last year amid escalating tensions between the U.S. and Iran.

A South Korean defense ministry official said that Iran has been notified of Seoul's decision. Tehran is said to have expressed its understanding of the move.
Kim Bum-soo, KBS World Radio News.
Share
Print
List