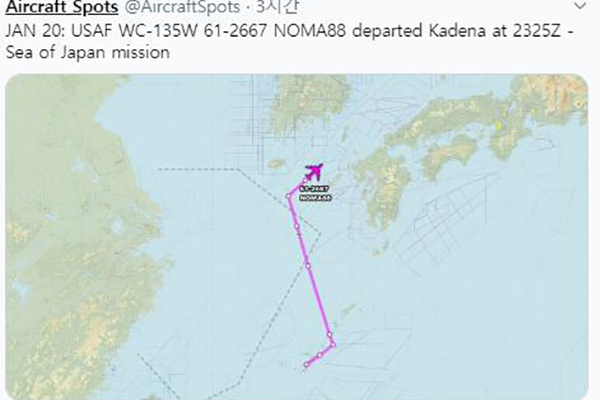 The United States reportedly flew a "nuke sniffer" surveillance aircraft near the Korean Peninsula on Tuesday amid concerns of possible provocations by North Korea.

According to private aviation tracker Aircraft Spots on Wednesday, a U.S. WC-135W Constant Phoenix took off from Kadena Air Base in Okinawa at 8:25 a.m. Tuesday and flew over the East Sea.

The aircraft, which reportedly arrived at the base last week, is commonly referred to as a "nuke sniffer" as it uses external flow-through devices to collect air samples and measures them onboard for radioactivity.

The surveillance by the aircraft sparks speculation that unusual nuclear movements by North Korea were possibly detected.

A North Korean diplomat said on Tuesday at a UN-backed conference that the country will no longer adhere to its moratorium on nuclear and missile tests, blaming the U.S.' failure to meet a year-end deadline for nuclear talks.
Share
Print
List