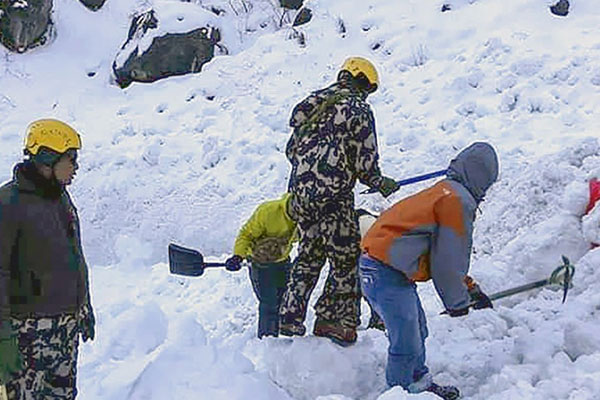 The search for four South Koreans and three Nepali guides who went missing while trekking along the Himalayas last week has been tentatively called off hampered by challenging weather conditions.

According the South Korean Foreign Ministry’s emergency response team, all search and rescue teams withdrew from the accident site Thursday around 2:30 p.m. after the temperature there dropped to minus 19 degrees Celsius.

Severe cold and heavy snow contributed to the decision to suspend the search on the ground and in the air.

Prominent South Korean mountaineer Um Hong-gil, who led drone search operations, said it is possible that those missing remain buried under 10 meters of snow and ice, and that there appears to be nothing they can do except for the snow to melt.

Nepali officials predict it will take at least two weeks before some snow melts, while some rescuers warned against the risk of a bigger avalanche.

The South Koreans, all teachers from South Korea's central South Chungcheong Province doing volunteer work in Nepal, were descending on the Deurali part of the Annapurna Base Camp course with five others last Friday when an avalanche struck them and three Nepali guides.