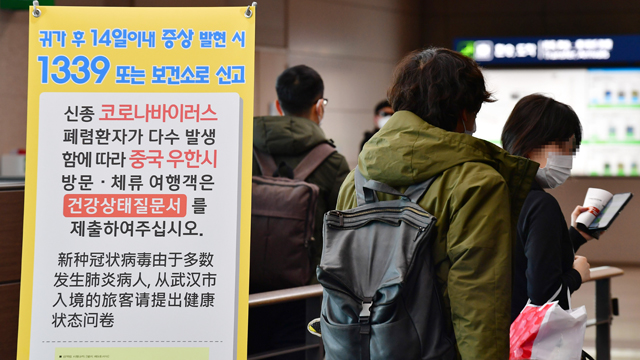 Anchor: South Korea has confirmed a second case of a mysterious pneumonia-like illness that has been spreading in China. This comes less than a week after the country reported its first infection. Local authorities are on heightened alert and enforcing quarantine measures at all airports and ports to prevent further spread of the disease.
Kim Bum-soo has more.

Report: South Korean quarantine authorities have found another person infected with the new coronavirus from China, raising the total number of confirmed cases in South Korea to two.

[Sound bite: Director General Dr. Jeong Eun-kyeong - Korea Centers for Disease Control and Prevention (Korean)]
"Because it is believed the virus is spreading from Wuhan, when planes from Wuhan arrive, we go out to the arrival gate to conduct one-on-one tests on passengers. However, almost half of all people coming into South Korea are coming from China, so it is very difficult to closely monitor everyone. We strengthened the quarantine process for those coming from cities with higher levels of danger, but for the rest we conduct tests when they arrive at the immigration zone."

[Sound bite: WHO Director-General Dr. Tedros Adhanom Ghebreyesus (English)]
“I'm not declaring a public health emergency of international concern today. As it was yesterday, the emergency committee was divided over whether the outbreak of novel coronavirus represents a PHEIC or not. Make no mistake. This is – though -- an emergency in China, but it has not yet become a global health emergency. It may yet become one.”

[Sound bite: WHO Director-General Dr. Tedros Adhanom Ghebreyesus (English)]
"... all of the deaths have been reported in China. With other cases reported in Japan, the Republic of Korea, Singapore, Thailand, the United States of America and Vietnam. We are aware of media reports of suspected cases in other countries, but those cases are still being investigated.”

As of Friday afternoon, the death toll in China rose to more than 25, with over 850 infected worldwide.