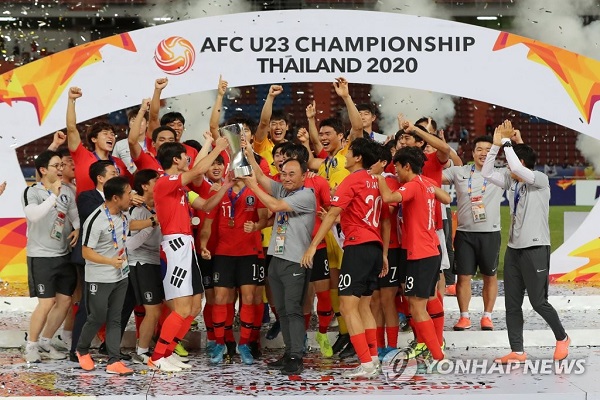 South Korea defeated Saudi Arabia one to zero in extra time on Sunday to win the Asian Football Confederation(AFC) U-23 Championship, while also punching a ticket to this year's Olympic games.

Defender Jeong Tae-wook headed in the winner in the 113th minute during the final match in Bangkok, Thailand.

Jeong leaped over Saudi defender Abdulbaset Al-Hindi to seal the victory for his side.

This is the first time that South Korea has won the title at the biennial championship, which marked its fourth tournament, winning all six of their matches.

The AFC tournament serves as the continental qualification for the 2020 Tokyo Olympics, and with the victory South Korea have been guaranteed their ninth consecutive Olympic appearance.

Midfielder Won Du-jae was named the tournament's Most Valuable Player(MVP), while Song Bum-keun was selected as the Best Goalkeeper.
Share
Print
List