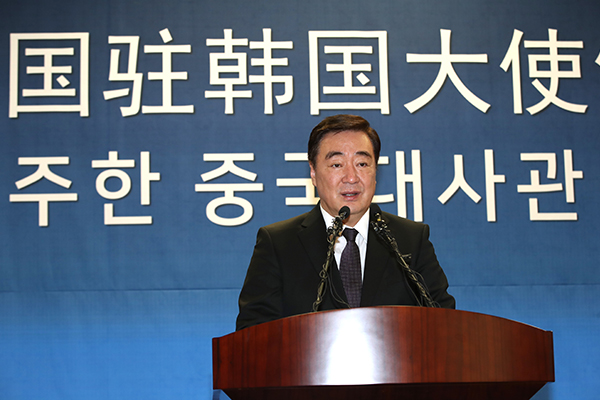 China's new ambassador to South Korea has urged countries to make "scientific" decisions in their fight against the new coronavirus in line with the World Health Organization(WHO)'s recommendations.

At a press briefing on Tuesday, Xing Haiming said the WHO is the world's largest and authoritative organization on global health issues. He then added that countries should base their decisions on the agency's recommendations, especially those against unnecessary travel and trade restrictions.

Xing said China is open and transparent in cooperating with the international community, stressing its response measures have "effectively slowed down the spread of the infectious disease to other countries."

The Chinese diplomat, however, refused to comment on South Korea's entry ban for foreigners who have been to China's virus-stricken Hubei Province in the past two weeks, which took effect earlier in the day.

Instead, the ambassador highlighted the two nations' friendly ties, expressing a hope that Seoul and Beijing will put themselves in each other's shoes and help each other cope with the outbreak.

Xing also thanked the South Korean government for its five-million-dollar emergency assistance to China, along with millions of protective masks and other relief items.
Share
Print
List