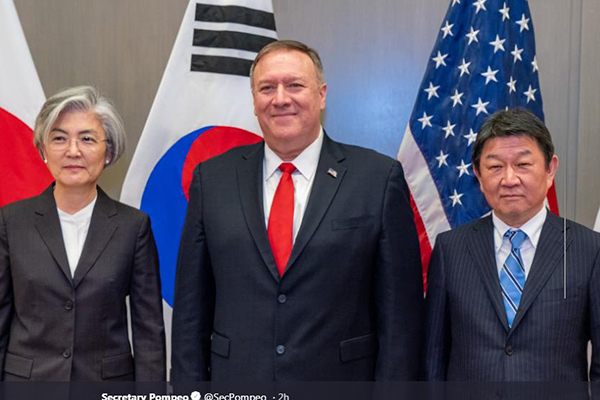 South Korea and Japan are reportedly mulling over holding foreign ministers' talks on the sidelines of an international security conference in the German city of Munich this month.

Japan's Kyodo News said on Thursday that the two countries are considering the talks between Foreign Minister Kang Kyung-wha and her Japanese counterpart Toshimitsu Motegi on the sidelines of the three-day Munich Security Conference set to open on Friday.

The report said if the talks are held, possibly on Saturday, Motegi is expected to repeat Tokyo's demand that Seoul resolve the bilateral dispute over the South Korean Supreme Court's rulings against Japanese firms for Korean victims of Japan's wartime forced labor.

It added that the top diplomats of South Korea and Japan are also expected to hold a trilateral meeting with U.S. Secretary of State Mike Pompeo and express their commitment to close trilateral cooperation on North Korea issues.
Share
Print
List