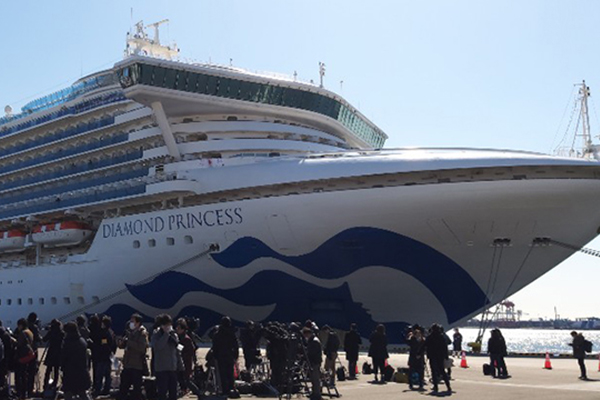 The government is reviewing the situation for around a dozen South Koreans aboard a quarantined cruise ship in Japan, but is unlikely to take the same emergency measures it did for nationals stranded in the Chinese city of Wuhan.

A senior official of the Foreign Ministry told reporters on Friday that the two cases are different.

The official pointed to the fact that most of the 14 South Koreans stuck on the Diamond Princess cruise ship off Yokohama regard Japan as their main country of residence. The official said only one of the nine South Korean passengers and two of the five South Korean crew members have close relatives to turn to in South Korea.

The official said Seoul is looking into responses by other governments affected by the cruise quarantine, but noted that the hardest-hit countries, including Australia, Canada and the United States, have not yet taken any emergency measures to rescue their citizens from the ship.

Seoul said the Koreans on board have yet to express any intention to return to South Korea via the South Korean Consulate General in Yokohama.

Japan's health authorities on Thursday said they plan to allow passengers over the age of 80 and those suffering chronic illnesses who have tested negative for the novel coronavirus to evacuate early. All South Korean passengers on board are younger than 80.

The Seoul official said one of the South Korean passengers is 70-something and suffers from chronic illness, adding the government plans to find out the person's wants before negotiating anything with Tokyo.

As of Thursday, two-hundred-47 people on board the cruise have tested positive for the virus.
Share
Print
List