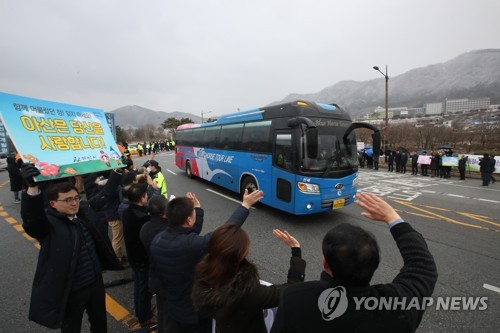 About 330 South Koreans evacuated from the coronavirus-hit Wuhan City in China have been released after two weeks of quarantine.

They were flown in from China on South Korea's second evacuation flight on February 1 and since have been quarantined at a temporary facility in Asan, South Chungcheong Province.

The 334 people were released Sunday morning after 14 days and then headed to their respective homes.

Government officials, including Interior Minister Chin Young and South Chungcheong Governor Yang Seung-jo, saw them off as they left the facility on 17 buses.

All the evacuees have tested negative for the virus before the departure.

The first group of 366 evacuees, who were flown in from China on January 31, were released the previous day.
Share
Print
List