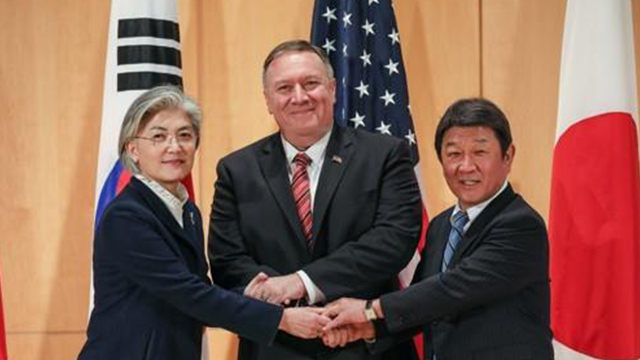 The U.S. State Department said on Saturday that the top diplomats of South Korea, the United States and Japan reaffirmed close cooperation on North Korea issues.

The department said in a statement that South Korean Foreign Minister Kang Kyung-wha and her U.S. and Japanese counterparts – Mike Pompeo and Toshimitsu Motegi – met on Saturday on the sidelines of the Munich Security Conference in Germany.

The department said the three sides reaffirmed close cooperation on North Korea and discussed a coordinated response to the coronavirus outbreak and other global security concerns.

The statement said the officials also emphasized the importance of the U.S.-South Korea and U.S.-Japan alliances to security and prosperity as a key part of the Indo-Pacific Strategy, adding that trilateral cooperation is essential to ensuring stability and peace in the region.

Seoul's Foreign Ministry said that the three ministers shared their assessments of the North Korean situation and held in-depth discussions on ways for trilateral cooperation on North Korea.

A ministry official said that the three sides generally agreed that there will be no significant provocations from North Korea at the moment when the regime closed its border in efforts to block the outbreak of the new coronavirus.
Share
Print
List