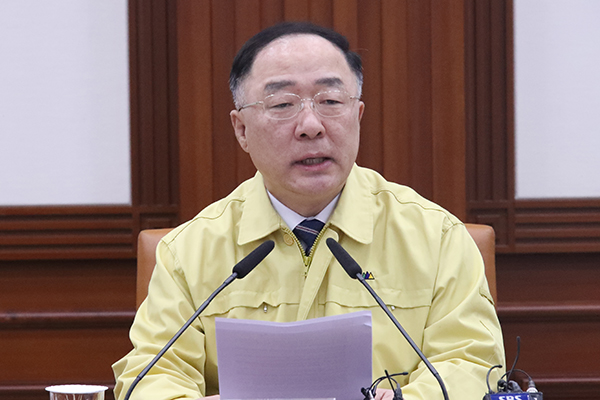 South Korea will provide emergency loans of up to 300 billion won to domestic budget carriers that have suffered economic fallout from the new coronavirus outbreak.

At a meeting with officials on Monday, Finance Minister Hong Nam-ki said budget carriers, which have been forced to suspend or reduce their operations, will be also exempt from airport use fees for up to three months.

Seoul will also set up a 60-billion-won emergency fund to help support the country's shipping industry, and exempt passenger transport companies suffering business suspension from paying fees for port facility and terminal use.

The government will encourage banks to offer 50 billion won in loans with an annual interest rate of one percent to small tourism companies.

As part of efforts to revive the country's tourism industry, the government will heighten disinfection of popular tourist destinations and nearby restaurants as well as provide related supplies to the businesses.

During talks over Japan's export curbs imposed last year and its impact on the domestic economy, Hong said the restrictions have had no visible effect on production and exports of semiconductors and displays so far.
Share
Print
List