Ruling Party to Replace 20% of Current Lawmakers via General Elections 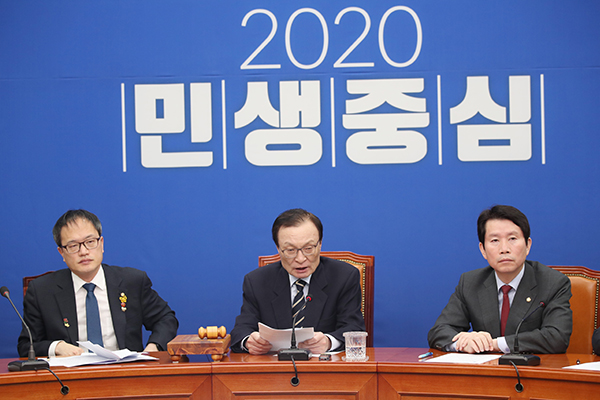 Anchor: Political parties are actively preparing for the general elections with just two months to go. The ruling Democratic Party plans to replace 20 percent of its current lawmakers, while a new party comprised of conservative forces launches operations.
Our Bae Joo-yon has more.

Report: The ruling Democratic Party(DP) on Monday announced it will replace 20 percent of its current lawmakers through a fair and objective candidate nomination process for the April 15 general elections.

This means the party will pass on at least 26 of its current 129 lawmakers as candidates for the elections and instead select new candidates.

DP Chairman Lee Hae-chan made the announcement during a meeting of the party’s Supreme Council.

Council member Nam In-soon said the DP will do better, citing the party's position at the forefront of past battles with authoritarian governments for freedom of expression and press.

She made the comment in reference to a column critical of the DP, written by Korea University research professor Lim Mi-ri. The ruling camp came under fire after it filed a complaint with the prosecution against Lim. The DP eventually dropped its complaint against the professor in the face of strong criticism, both inside and outside the party.

A merger plan among three parties based in the Jeolla Provinces, including the Bareunmirae Party(BP), hit a snag after BP Chairman Sohn Hak-kyu refused to endorse their proposal to unite, saying a region-based party is nothing new.
Bae Joo-yon, KBS World Radio News.
Share
Print
List