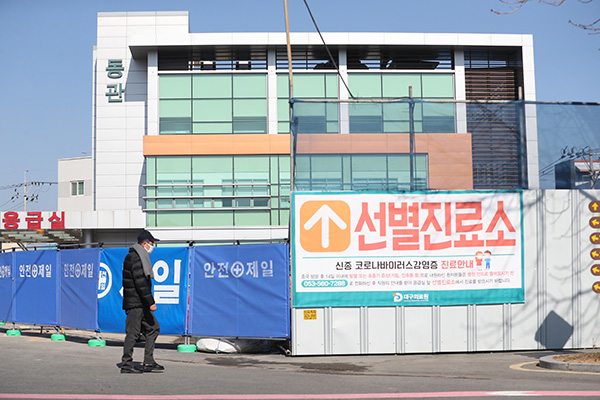 South Korea's latest case of coronavirus was reported in the country's southeastern Gyeongsang area, the first such case in the region.

The Korea Centers for Disease Control and Prevention(KCDC) said on Tuesday that the country's 31st patient is a 61-year-old woman living in the city of Daegu.

The patient was isolated after she visited a public health clinic with a fever and pneumonia-like symptoms on Monday afternoon.

The patient has no record of traveling abroad in the past month or coming into contact with a confirmed patient.

Prior to testing positive for the virus, the woman was hospitalized at a medical facility in Daegu on February 7 to treat injuries from a car accident on the previous day. Before that, she went to work on February 6 and 7.

On February 9 and 16, the patient attended two-hour-long Sunday services at a local church, and had lunch with an acquaintance at a hotel in the city on February 15.

On January 29, the patient visited her company’s headquarters located in Seoul's Gangnam district.

The KCDC has sent a team of 12 experts to conduct an epidemiological survey in cooperation with local health authorities and plans to isolate people she has come into contact with.
Share
Print
List