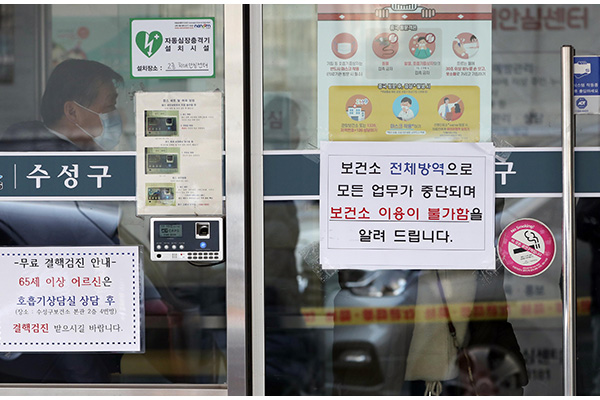 Multiple new cases of the novel coronavirus have been reported from Daegu and the surrounding North Gyeongsang Province a day after the southeastern city confirmed its first-ever COVID-19 patient.

The Kyungpook National University Hospital located in Daegu said it has closed its emergency room since 11:15 p.m. on Tuesday. Patients staying in the ER have been put in isolation in other areas in the hospital.

An official said the hospital’s head ordered the closure after some patients hospitalized within its negative pressure isolation room tested positive for the coronavirus. The official said the exact number of confirmed patients will be announced by the Korea Centers for Disease Control and Prevention(KCDC). Around 10 people were known to have been newly infected in the region.

On Tuesday, a 61-year-old woman living in the city was diagnosed as the nation’s 31st novel coronavirus patient, marking the first time a case was reported in the Gyeongsang Provinces.

The patient, who had no record of traveling abroad in the past month or coming into contact with a confirmed patient, reportedly visited a substantial number of areas, including around Daegu and Seoul, raising concerns she may have spread the virus to others.
Share
Print
List