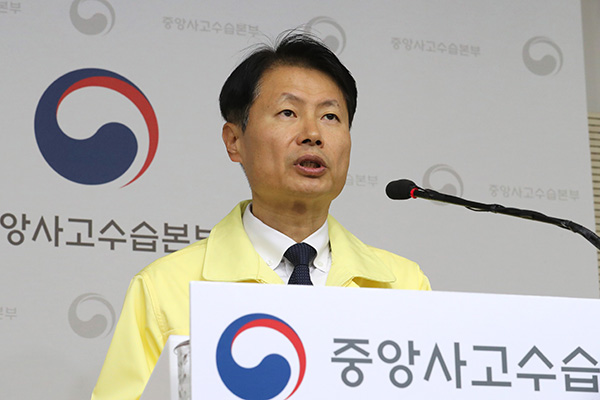 Anchor: South Korea has reported 53 new cases of COVID-19, raising the total number of infections in the country to 104. One confirmed case has died as well. Most of the new infections were reported in the southeastern city of Daegu, where many of them came into contact with the nation's 31st patient. The government says the disease may have begun spreading among the general population.
Kim Bum-soo has more.

Report: The South Korean government says the new coronavirus has now entered into an early phase of community infection.

[Sound bite: Vice Health Minister Kim Gang-lip - Deputy Head, Central Disaster Relief Headquarters (Korean)]
"As the risk factor of COVID-19 entering from overseas continues, we judge we're at the early stage in which, simultaneously, community-acquired infections are spreading. Accordingly, we plan to continue working to block the entry of the virus from overseas, focusing on quarantines, and to discover cases early on. Moreover, we think this is a time in which it's very important to bolster the response system to deal with the spread of community-acquired infections."

He explained that the recent surge of infections centers on a localized group involving the nation's 31st patient. The 61-year old South Korean woman attended mass gatherings of a religious sect in the southeastern city of Daegu.

Considering the localized nature of the outbreak, the government will maintain its crisis level at the second-highest "vigilance" on the four-notch scale.

[Sound bite: Vice Health Minister Kim Gang-lip - Deputy Head, Central Disaster Relief Headquarters (Korean)]
"The government is responding to this epidemic in the [final] 'serious' level although currently the alert level is kept at the [third] 'vigilance' level."
"The government will review the option of raising the alert level after comprehensively assessing the relative risk and trends in incidents of community-acquired infections."

The government has dispatched 24 doctors to Daegu to create more virus-detection centers there.

South Korean health experts believe that COVID-19 is less infectious than MERS. They noted, however, that the disease is a significant risk to those who have pre-existing illnesses or the elderly.
Kim Bum-soo, KBS World Radio News.
Share
Print
List