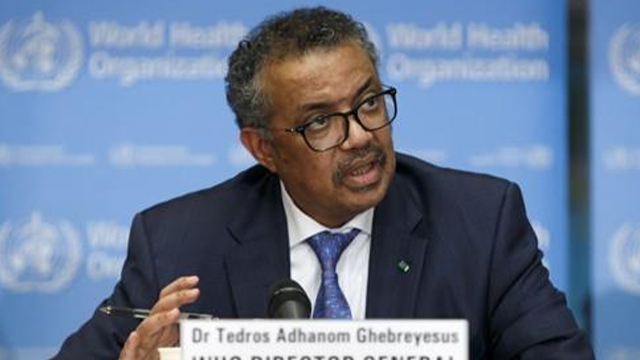 Anchor: Despite the recent surge in the number of new coronavirus infections in South Korea, the World Health Organization has expressed its faith in the country's ability to handle the situation. WHO Director-General Tedros Adhanom Ghebreyesus said the cases in Korea are manageable.
Kim Bum-soo has more.

Report: The World Health Organization(WHO) says South Korea is able to manage the recent increase of novel coronavirus cases in the country.

During a daily news briefing in Geneva, Switzerland, on Thursday, WHO Director-General Tedros Adhanom Ghebreyesus addressed the recent surge in South Korea.

[Sound bite: WHO Director-General Dr. Tedros Adhanom Ghebreyesus (English)]
"... And with measures they can take which is proportionate to the public risk they have, I think the number of cases are really manageable. And I hope that South Korea will do everything to contain this outbreak at this early stage."

Dr. Oliver Morgan, in charge of WHO's risk assessment, pointed out that the surge of COVID-19 in South Korea is localized and the cases are under tight management.

[Sound bite: Dr. Oliver Morgan- Director of Health Emergency Information and Risk Assessment (English)]
"The numbers of cases in South Korea reported today are actually from several distinct clusters, which the Korean authorities are following very closely. So though the number seems quite high, they are mostly linked to known existing outbreaks. So that hasn’t changed and it doesn’t signal a particular change in the global epidemiology, but it does signal that the Korean authorities are following up very closely, very vigorously on all the new cases and those outbreaks they’ve identified."

South Korea on Friday declared a “special management zone” around the southeastern city of Daegu, which has seen a sudden spike in infections. Most of the cases there are linked to the religious sect dubbed the Shincheonji Church of Jesus that is active in the region. South Korean Prime Minister Chung Sye-kyun said that the government will obtain a full list of the sect members and conduct virus tests while they are placed in self-quarantine.

Meanwhile, Dr. Tedros warned that while the number of cases outside China are lower, it may not be that way for long. He urged countries not to squander the opportunity they currently have to get ahead of the virus.
Kim Bum-soo, KBS World Radio News.
Share
Print
List