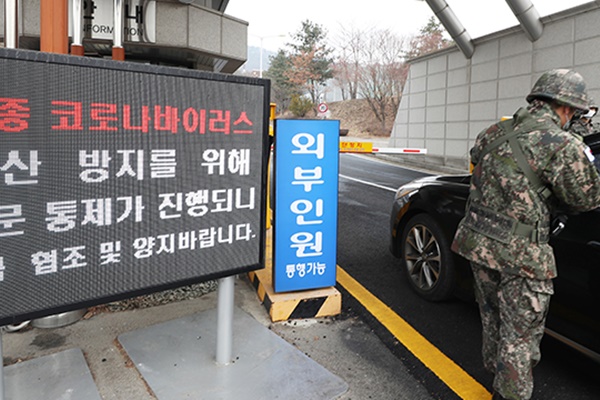 Three cases of COVID-19 were reported in South Korea's military, prompting authorities to monitor personnel who have returned from furloughs to the virus-stricken Daegu and North Gyeongsang region and ban future outings.

The Korea Centers for Disease Control and Prevention(KCDC) on Friday said a Navy sailor serving on the southern Jeju Island tested positive for the virus, after returning from furlough to his hometown of Daegu from February 13 to Tuesday.

An Air Force officer based in Daegu, currently assigned to a unit at the military compound in Gyeryong, South Chungcheong Province, also tested positive after showing symptoms on Wednesday.

An Army officer in the central county of Jeungpyeong, North Chungcheong Province, was also confirmed to have contracted the virus, after meeting his girlfriend in Daegu during furlough.

The girlfriend reportedly attends the same religious sect as the country's 31st patient, who is suspected of being a "super spreader" of the virus.

The military launched a survey of personnel who have visited Daegu and North Gyeongsang Province on furlough or outings since February 10, when the 31st patient began showing symptoms.

Starting Saturday, all personnel will be banned from taking furloughs, going on outings or having visitors.

Vacations granted before military discharge and those for family events such as weddings and funerals will not be subject to the restrictions.
Share
Print
List