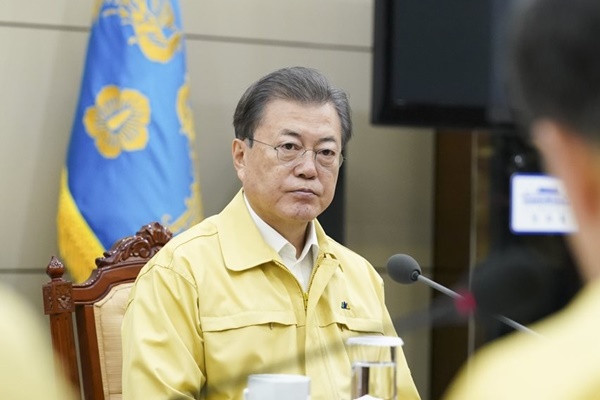 President Moon Jae-in has called for a thorough investigation into people who recently attended services and a funeral in connection to a religious sect in Daegu.

Moon issued the order on Friday after receiving an emergency briefing on the coronavirus outbreak from Prime Minister Chung Sye-kyun, including the designation of Daegu and surrounding areas in North Gyeongsang Province as "special management zones."

There have been at least 58 confirmed cases of the virus among members of the "Shincheonji" religious sect in Daegu and those who recently attended a funeral at Daenam Hospital in nearby Cheongdo County for sect leader Lee Man-hee's brother.

Prime Minister Chung vowed to secure a list of the sect members so they could be isolated and tested for the virus.

The president told officials to obtain the visitors' book from the funeral to assist in efforts to track down attendees, rather than only relying on information provided by the sect.