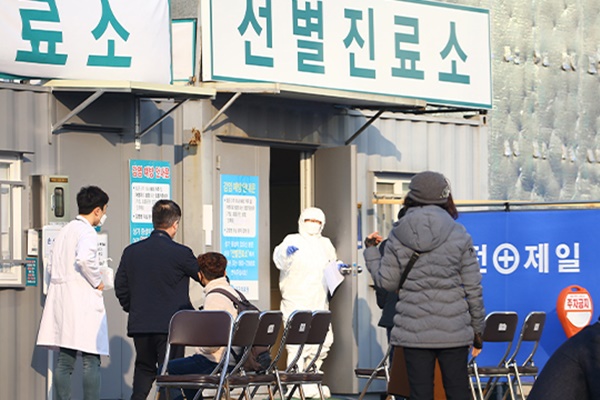 Anchor: One-hundred additional cases of COVID-19 were reported in South Korean on Friday, raising the total number of infections in the country to 204. The Korea Centers for Disease Control and Prevention said a majority of the cases were in the southeastern city of Daegu and Cheongdo County, both of which were designated "special management zones" due to a recent surge in infections there.
Kim Bum-soo has more.

Report: South Korea's southeastern city of Daegu and nearby Cheongdo have been declared special quarantine zones amid a sudden spike in COVID-19 cases in the area.

[Sound bite: Prime Minister Chung Sye-kyun (Korean)]
"[The government] will designate Daegu and the Cheongdo region of North Gyeongsang Province, which are facing difficulties following the recent surge of infections, as 'special management zones' and carry out decisive measures. It is most urgent to identify those exposed to [confirmed patients] and treat the infected. Hospital beds, manpower, equipment and all necessary resources will be provided without spare. Military medical personnel will be dispatched and makeshift shelters built for those who cannot quarantine themselves."

With nearly two-point-five million residents, Daegu is the fourth largest metropolis in the country in terms of population. Some 47-thousand people live in the adjacent Cheongdo County.

Most of the cases there are linked to the religious sect dubbed the Shincheonji Church of Jesus that is active in the region.

Health Minister Park Neung-hoo told reporters the government obtained a full list of the sect members and is conducting virus tests while they are placed in self-quarantine.

[Sound bite: Health Minister Park Neung-hoo (Korean)]
"As for the Daegu region, we have the list of some nine-thousand people of the religious group and have launched self-quarantine and [other] isolation measures in order to prevent additional infections. Local government officials will be assigned to manage [residents under] quarantine and the religious organization is also actively cooperating...."

Citizens in the area have been advised to delay scheduled public events while the beginning of the spring semester has been postponed for local kindergarten, elementary and middle schools.

Daegu Mayor Kwon Young-jin also called on residents in his city to wear face masks and asked them to stay indoors.

Since the surge in cases this week, the government admitted the outbreak in South Korea has now entered into a phase of "community-acquired infections."

However, in light of the localized nature of the outbreak, the government said it will maintain the nationwide crisis level at the second-highest "vigilance" on the four-tier scale.
Kim Bum-soo, KBS World Radio News.
Share
Print
List