S. Korea to Postpone Opening of New Semester until March 9 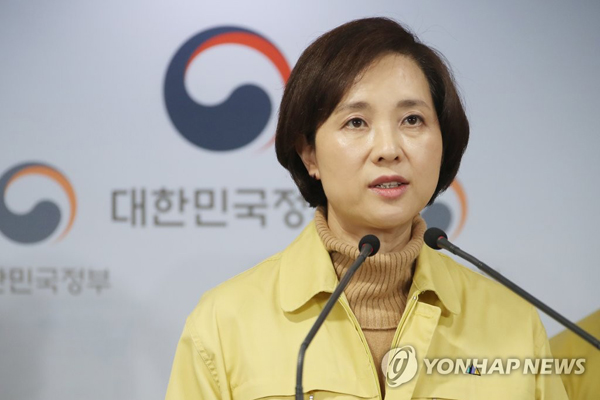 The government has announced a set of new measures to contain the rapid spread of the novel coronavirus.

The central disaster relief headquarters unveiled the measures in a news briefing after a pan-government meeting on Sunday afternoon, announcing the decision to raise the country's COVID-19 alert status to the highest "serious."

Health Minister Park Neung-hoo in charge of the headquarters said in the briefing that it is time to take preemptive measures to prepare for the possibility that the outbreak will worsen and deteriorate from the community spread to the national level.

In line with the raised alert level, the government has set up a central disaster and safety countermeasures headquarters under Prime Minister Chung Sye-kyun to oversee the government's fight against the virus.

Minister Park and Interior Minister Chin Young will serve as vice chiefs.
It's the first time that a prime minister has taken charge of the headquarters.

The government also decided to postpone the opening of the new semester for all kindergartens, elementary, middle and high schools across the nation until March 9, a week later than initially planned.
Share
Print
List