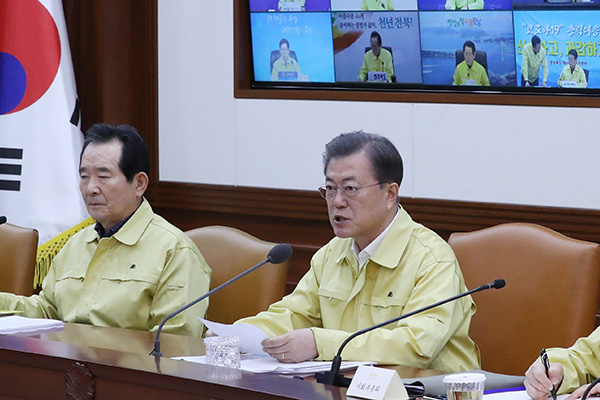 Anchor: As a sharp increase in the number of coronavirus cases in South Korea recently has stoked fear the outbreak may be spinning out of control, the government has raised its alert system to its highest level. Additionally, the opening of schools has been postponed across the nation. As of Monday morning, over 760 people in the nation have been diagnosed with the contagious disease that has already claimed the lives of seven people.
Moon Gwang-lip has more.

Report:
President Moon Jae-in said on Sunday that the government has decided to raise its alert status on the novel coronavirus to the highest level of “serious” in response to a surge in new infections in the country.

Moon announced the decision in his opening remarks at a pan-government meeting on the COVID-19 outbreak.

It's the first time that the country has raised the virus alert level to the highest in the four-tier system in eleven years since Influenza A (H1N1) in 2009.

The president said that the nation is facing a grave watershed in the COVID-19 situation and that a few days from now will be a very critical moment.

South Korea reported 161 new cases of the novel coronavirus overnight, bringing the total number of infections in the nation to 763 as of Monday morning. It was a significant jump from a week ago before a mass outbreak in the country’s southeastern regions started with the 31st patient in Daegu.

The number of those who died of the disease nationwide also surged to seven.

President Moon stressed that it is a crucial time for the whole nation, including the central and local governments and citizens, to make unified and all-out efforts to ride out the outbreak.

He ordered the government and local municipalities not to hesitate to take "unprecedented powerful" measures to contain the deadly virus without being restricted by "regulations."

Among a set of new measures announced following the pan-government meeting was the decision to set up a central disaster and safety countermeasures headquarters under Prime Minister Chung Sye-kyun.

The government also decided to postpone the opening of the new semester for all kindergartens, elementary, middle and high schools across the nation until March 9, a week later than initially planned.

As part of region-specific measures, Health Minister Park Neung-hoo urged people in the virus-stricken Daegu to refrain from going outside at least for the next two weeks to slow down the spread.
Moon Gwang-lip, KBS World Radio News.
Share
Print
List