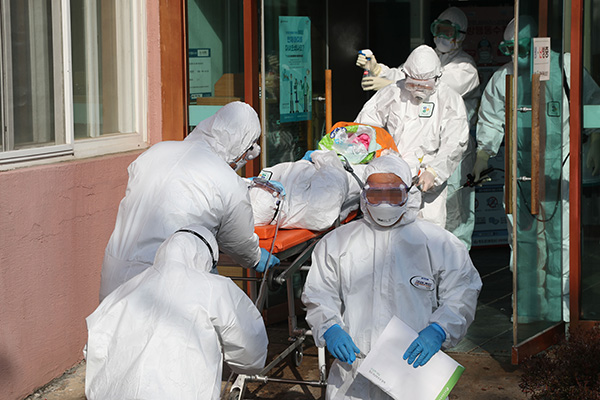 The number of those diagnosed with COVID-19 in South Korea has topped 800 with over 200 additional cases reported on Monday, while the death toll rose to eight.

The Korea Centers for Disease Control and Prevention(KCDC) updated in the afternoon that 80 more cases were confirmed between 9 a.m. and 4 p.m., raising the total number of infections in the nation to 833. Earlier in the day, 161 cases were announced.

Daegu and North Gyeongsang Province, which have emerged in the past several days as the country’s biggest outbreak clusters, led the new infections at 53, including 41 in the southeastern city. The southern port city of Busan also reported 12 cases, while Seoul and the surrounding Gyeonggi Province confirmed only one and two new cases, respectively.

As of earlier in the day, there were seven confirmed fatalities, but a 66-year-old man, the nation’s 107th COVID-19 patient, was later pronounced the eighth victim.

The man died at Kyungpook National University Hospital in Daegu while under treatment. He was taken there last Tuesday ​from Daenam Hospital in Cheongdo County in North Gyeongsang Province after developing pneumonia-like symptoms. He tested positive for the virus two days later.

Meanwhile, four more patients were released from quarantine, lifting the number of those fully recovering from the disease to 22.

A total of 31-thousand-923 other people have been checked for the virus so far and 20-thousand-292 of them are awaiting results.
Share
Print
List