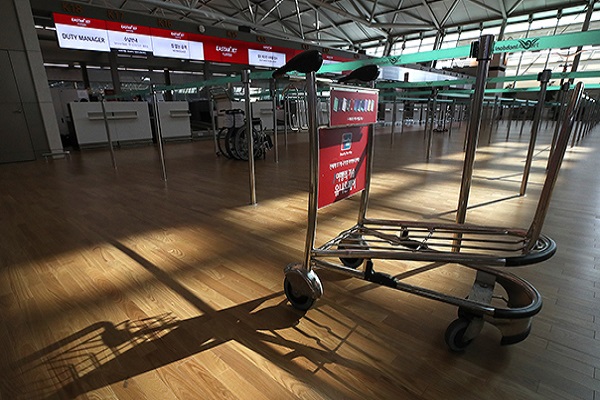 The number of countries restricting the entry of travelers from South Korea over coronavirus concerns has risen to 71.

Seoul's Foreign Ministry said that six more countries have introduced entry restrictions as of Saturday morning, bringing the total to over 70, which accounts for more than a third of the 193 UN member nations.

Thirty-three countries, two more from Friday, are now imposing a partial or an outright entry ban on travelers from South Korea.

Starting Sunday, Kyrgyzstan will ban the entry of foreigners, coming from and who have passed through countries, where COVID-19 cases have surged such as China, Korea, Japan and Italy.

Lebanon has also banned travelers who have visited affected countries of the outbreak from entering the country.

Japan and Singapore have an entry ban on foreign nationals who had visited the hardest hit Daegu and Cheongdo areas in South Korea in the past 14 days, while Hong Kong and Mongolia are banning the entry of all passengers on-board flights from Korea.

Thirty-eight countries, up by four from Friday, have meanwhile tightened entrance procedures including both quarantines and screenings.

This includes a number of European nations and local governments in China.

The Foreign Ministry has issued an advisory urging Korean citizens to reconsider or postpone travel plans to countries that have imposed entry restrictions.
Share
Print
List