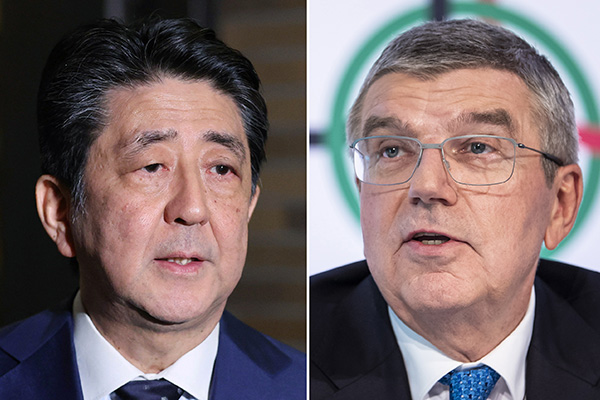 Report: The 2020 Summer Games have officially been postponed, a first in Olympic history.

[Sound bite: Shinzo Abe, Japanese Prime Minister (Japanese)]
"Based on the current situation, we have made a proposal to consider postponing (the Games) for about a year to ensure that the world's athletes can play in the best conditions and have a safe and secure tournament for the audience.”

Abe said that Bach was in "one hundred percent agreement" when Japan asked the IOC to push back the event. The IOC chief said the aim is to hold the Games in the summer of 2021.

[Sound bite: Thomas Bach, IOC President (English)]
"The World Health Organization speaks of the acceleration of the spreading of the virus so we were addressing this situation and came to the conclusion that, in order to safeguard the health of the athletes and everybody involved in the Olympic Games, we have to postpone the Olympics and Paralympic Games Tokyo 2020 to the year 2021, with the aim to have it there at the latest in summer time 2021."

In the Olympics’ 124-year, modern history, the Games were not held on time on three occasions due to World Wars One and Two.

[Sound bite: Thomas Bach, IOC President (English)]
"If we do so, if we are all standing together and everybody makes his or her contribution, then I am really confident that in the end these Olympic Games Tokyo 2020 can be the light at the end of this dark tunnel we are all going through together now, and we all want to see the Olympic flame at the end of this dark tunnel."

The Summer Olympics and Paralympics were due to be held between late July and early September.

The delay came amid increasing pressure from athletes who have been struggling to maintain their maximum potential as training facilities have been closed due to the virus outbreak that began late last year.
Park Jong-hong, KBS World Radio News.
Share
Print
List