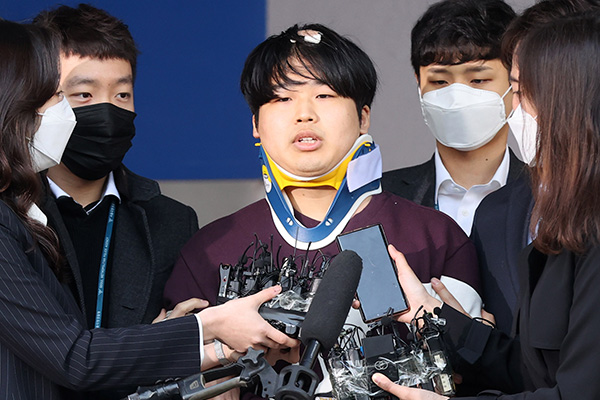 Amid growing public outrage, the primary suspect of an alleged Telegram sex crime ring apologized to the victims.

[Sound bite: prime suspect Cho Joo-bin (Korean)]
"I sincerely apologize to everyone who suffered because of me, including President Sohn Suk-hee, Mayor Yoon Jang-hyeon and journalist Kim Woong. I would like to thank you for putting an end to the unstoppable life of a devil."

Twenty-four-year-old Cho Joo-bin appeared before reporters waiting outside Seoul Jongno Police Station Wednesday morning as his custody was handed over to the prosecution.

He is accused of coercing his victims, including underage girls, into conducting sexual and abusive behavior and facilitating rape on camera, then selling the video clips in a string of chat rooms on the mobile messaging app Telegram.

At least 74 people, including 16 minors, are believed to have fallen victim to the alleged wrongdoings by Cho and other chat room operators, as well as an estimated ten-thousand users who are suspected to have shared the video clips.

It is immediately unclear why Cho named the president of a media company, a former city mayor and a reporter as victims of his wrongdoings during his perp walk. Police said the three are irrelevant to the sex abuse scandal.