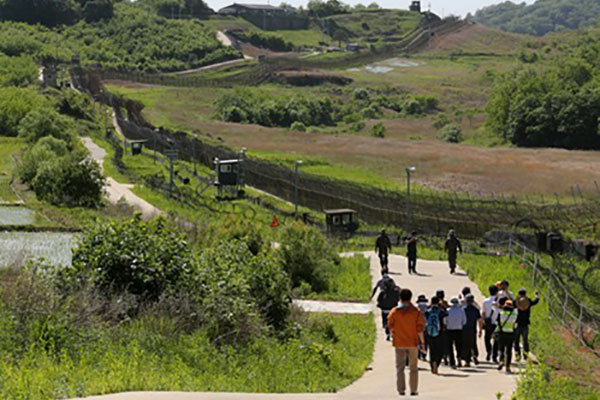 South Korea will open an additional seven trekking routes along the Demilitarized Zone(DMZ) as part of a state initiative to facilitate peace on the Korean Peninsula.

The government announced on Wednesday that this year it will invest 14 billion won into the Moon Jae-in administration's "DMZ Peace Trail" project aimed at allowing visitors to experience the ecology, culture and history of the area.

Last year, the first three trekking courses opened along the DMZ at the border towns of Goseong, Cheorwon and Paju on a trial run.

Seoul plans to open seven new routes in seven other border towns -- Ganghwa, Gimpo, Goyang, Yeoncheon, Hwacheon, Yanggu and Inje -- along with ten base centers that will house restaurants, cafes or guesthouses.

The three-year project, running until 2022, is expected to complete a 526-kilometer trail connecting the western county of Ganghwa in Incheon to the eastern border county of Goseong in Gangwon Province.
Share
Print
List