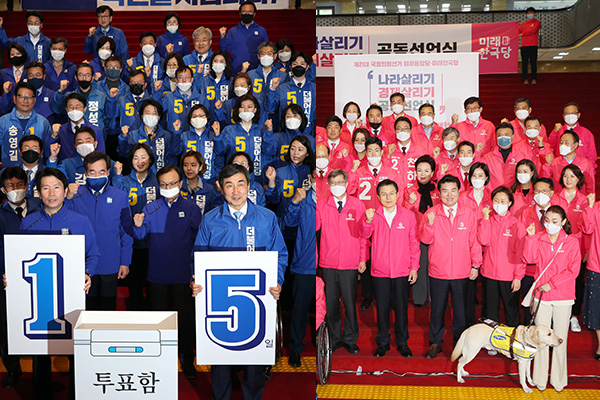 Anchor: South Korea's political parties are pushing the government to swiftly implement and expand eligibility for its novel coronavirus aid, which currently aims to assist around 70 percent of households struggling amid the pandemic. However, the parties are facing some criticism that their calls are populist policies ahead of the upcoming elections.
Choi You Sun reports.

Report: At a ruling party meeting on Monday, Democratic Party(DP) Chair Lee Hae-chan suggested the government provide its one-off coronavirus relief payment to all households in the country.

Lee stressed that it would be important to show all South Korean people that the nation is protecting them, regardless of where they live or how much they earn.

While recognizing the need to consider the state of the nation's finances, the DP leader vowed to put forth related measures shortly after next Wednesday's general elections.

The DP is pushing to expand eligibility, after the Moon Jae-in administration announced last Tuesday that it would provide emergency disaster relief assistance of one million won to every four-person household with a gross income at or below 70 percent of the total.

The relief money would be financed through a second extra budget expected to be approved by the National Assembly shortly after the elections.

Addressing criticisms against Hwang, who had been critical of government aid being ​put forth during the election season, the UFP's election committee chief Kim Chong-in said Hwang was highlighting the need to make the payments as quickly as possible.

Kim then criticized the government for pledging aid without a clear plan on financing it, as well as its failed response to the pandemic and fallout in comparison to countries and regions like Taiwan, Singapore and Hong Kong.

The minor opposition Minseang Party and Justice Party both urged the government to make all South Koreans eligible for the aid and to implement it within the month.