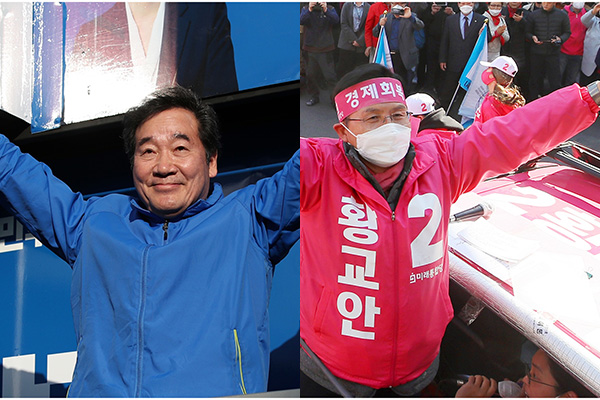 According to the National Election Commission(NEC), with the vote counting a quarter of the way through as of 9:31 p.m., former Prime Minister Lee has secured 63-point-two percent of the votes cast in Seoul’s Jongno District.

The duel drew much attention not only for the constituency’s symbolic significance as the nation’s key political center but also as a barometer for the political future of the two potential presidential runners.

Also as of 9:31 p.m., the ruling party was leading in 143 out of the 253 districts, while the main opposition was leading in 95 constituencies. The minor progressive Justice Party was up front in one district, while five other constituencies were led by independent candidates.

As for the 47 proportional representation slots, the DP’s satellite Together Citizens’ Party has secured 34-point-32 percent of the votes with only two-point-42 percent of the votes counted. The UFP’s affiliate Future Korea Party garnered 33-point-eight percent, followed by the Justice Party and the Open Democratic Party at eight-point-44 percent and four-point-91 percent, respectively.
Share
Print
List