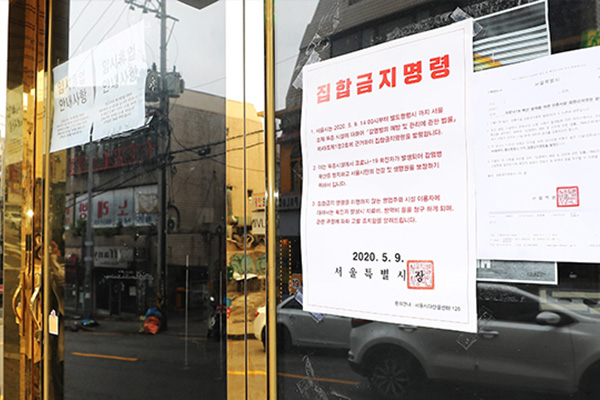 Seoul City plans to offer anonymous COVID-19 testing for recent visitors to Itaewon as the number of confirmed cases linked to clubs in the neighborhood shot to over 80.

Seoul Mayor Park Won-soon announced the move in a media briefing on Monday.

Park said as of 10 a.m., 85 people nationwide have tested positive either as visitors to six clubs in Itaewon or as family members or acquaintances. In Seoul, 51 related cases were reported while 27 were from adjacent metropolitan areas, including 20 in Gyeonggi Province.

He said a total of three-thousand-77 visitors and those who came into contact with them have been tested thus far with one-thousand-49 awaiting results.

The mayor said five-thousand-517 people were presumed to have visited the venues between April 24 and May 6, based on the roll books kept by their operators. Of that amount, two-thousand-405 have been reached. He said the other three-thousand-112 people, however, avoided calls or apparently left wrong telephone numbers.

Park urged everyone who visited the clubs or nearby businesses during the 12-day period to get tested quickly, not only for their health but for the safety of all.

He ensured that people can get tested for free and anonymously if they want, warning that those who visited the area during the cited period but did not get tested may have to pay two million won in fines.
Share
Print
List