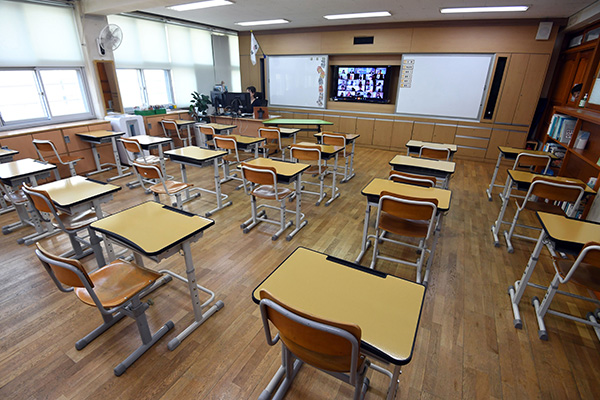 The South Korean government has decided to postpone physical school openings that were supposed to begin on Wednesday by one more week in the wake of a cluster of infections linked to Itaewon clubs in Seoul.

The decision was announced Monday afternoon by Vice Education Minister Park Baeg-beom after Education Minister Yoo Eun-hae discussed the matter in a conference call with Jeong Eun-kyeong, head of the Korea Centers for Disease Control and Prevention(KCDC), and other officials.

Accordingly, high school seniors will return to classrooms on Wednesday of next week.

The schedule for other primary and secondary school students to return to the classroom in phases will also be delayed by a week on the premise the situation regarding the latest cluster of infections improves.

Education and quarantine authorities are expected to further assess the Itaewon cluster and related epidemiological surveys before announcing more details on the the new classroom opening schedule.

More than 170-thousand people signed a petition on the presidential website asking for a further delay of school openings amid the spike in new coronavirus infections linked to six clubs in Itaewon, which reached a total of 94 cases as of 6:30 p.m. Monday.
Share
Print
List