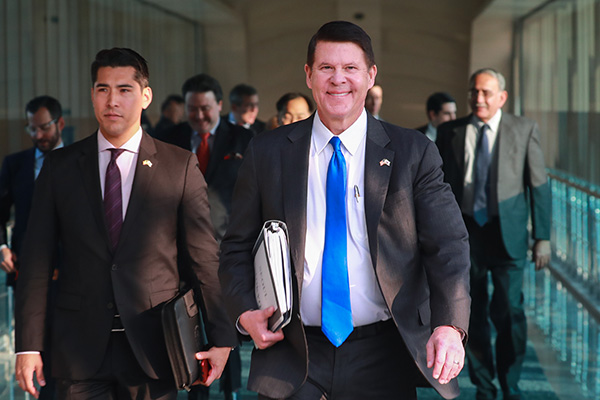 The United States is pushing forward an initiative to exclude China from global industrial supply chains, including the Economic Prosperity Network(EPN), and is calling on allies to take part.

According to the State Department on Thursday, Under Secretary of State Keith Krach talked about the 5G Clean Path initiative during a special briefing via telephone on Wednesday.

He cited that the initiative requires all 5G data entering or exiting U.S. diplomatic facilities to transit only through trusted equipment and never through equipment from untrusted vendors such as Huawei and ZTE.

He added that Washington urges its allies and partners to join the U.S. in requiring a 5G clean path for their own diplomatic facilities.

Krach spoke with South Korean officials about EPN and explained that the key value of the network aims to expand and diversify supply chains that protect people in the free world. He added that the U.S. sees great opportunity with South Korea in this regard.

Assistant Secretary of State for International Security and Nonproliferation Christopher Ford, who also attended the briefing, said that as the world increasingly looks to genuinely trusted suppliers outside of Chinese technology firms, opportunities would arise for those trusted suppliers, including Samsung in South Korea.
Share
Print
List