Analysts Say Worst is Over for Benchmark KOSPI 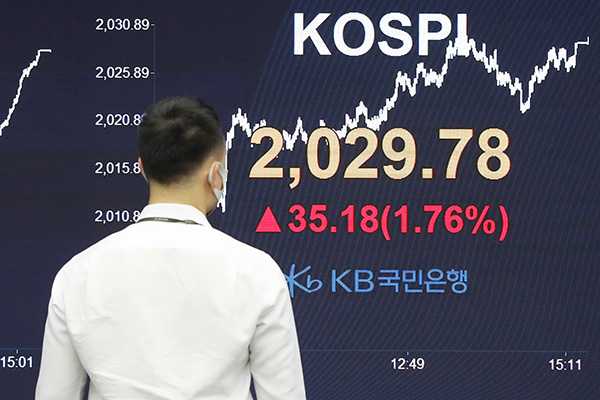 Anchor: The Korea Composite Stock Price Index on Tuesday rose one-point-76 percent to surpass the two-thousand mark some two and a half months after losing significant ground due to the coronavirus pandemic. Analysts said the worst may be over for Korean stocks.
Kim Bum-soo has more.

Report: South Korea's benchmark stock price index regained much of the losses it suffered due to the coronavirus outbreak, rebounding to above the two-thousand point threshold.

The Korea Composite Stock Price Index, or KOSPI, on Tuesday ended the session at two-thousand-29-point-78, or one-point-76 percent higher than the previous closing, while the secondary tech-heavy KOSDAQ also jumped one-point-28 percent.

The KOSPI stood at over two-thousand-267 at its highest point this year in January. But over the course of two weeks from March 5, it nosedived from two-thousand-85-point-26 to one-thousand-457-point-64 amid worldwide lockdowns to prevent the spread of COVID-19. Since then, the stock index has been on the rise, be it through small scale fluctuations.

Daniel Dongwon Yoo, Head of Global Investment at Yuanta Securities, said the worst is over for Korea's stock markets.

[Sound bite: Daniel Dongwon Yoo - Head of Global Investment, Yuanta Securities (English)]
"I believe the worst is over for KOSPI and KOSDAQ due to the COVID-19 issue. In the past pandemic cases, we saw equity market rise by significant level post crisis. For example, the 1918 to 1921 Spanish flu, after falling 36 percent, it rose 450 percent in the next several years. Also, 2009 Swine flu caused pandemic, but due to aggressive monetary policy and fiscal policy market rose by 83 percent from its bottom before any type of major correction. More important factors are the level of liquidity injection and fiscal boosting measures. And clearly, this time around level is at least twice bigger than the 2008 financial crisis level."

IHS Markit's Asia Pacific chief economist Rajiv Biswas told KBS World Radio that an escalation of U.S.-China economic tensions could create a further negative shock to Chinese exports as well as wider negative effects on Asian manufacturing supply chains, which have already been badly hit by the economic shockwaves from the COVID-19 pandemic.

The concerns come as bilateral tensions are escalating between the G2 nations over Beijing's proposed new national security law for the Hong Kong Special Administrative Region.